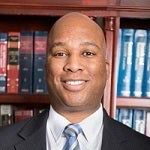 Robert Hendricks' primary focus is personal injury law and has 16 years of experience as a trial attorney in Maryland. Mr. Hendricks also brings a great deal of criminal trial experience to the table, having served as an Assistant State Prosecutor in both Montgomery County, Maryland, as well as practicing criminal defense in courts across the state of Maryland. On top of that, Mr. Hendricks has also taught trial advocacy as an adjunct professor at the University of Baltimore.

As a member of the RG Law, PLLC team, Mr. Hendricks will focus on personal injury law and cases involving car accidents, DUI, shoplifting, driving while suspended, and driving without a license.

Robert Hendricks holds a B.A. in Philosophy from St. Mary's College of MD and a J.D. degree from The University of Baltimore School of Law. He is a licensed member of the Maryland State Bar and the Bar of the United States District Court for the Northern District of Maryland.

Mr. Hendricks is a lifelong resident of Montgomery County, Maryland and is a black belt in Tae Kwon Do, having practice martial arts for the last 20 years.

Thank you for contacting us. We will get back to you shortly.

Please complete all required fields below.

We'll gladly discuss your case with you at your convenience. Contact us today to schedule an appointment.