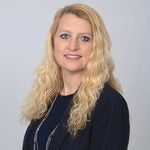 For Renee Abbott Blocker, the practice of law is all about people—making the connection with her clients, understanding their predicaments and concerns, advocating for their rights, and working tirelessly to achieve the best possible outcome for them. Ms. Blocker has played an integral role in RG Law since its founding in 2016, and she feels proud and empowered to be part of an all-woman law firm.

Ms. Blocker graduated with honors from UC Davis with a B.S. in Agricultural and Managerial Economics, then worked for several years in the information technology sector before earning her J.D. degree from Catholic University Columbus School of Law. While in law school, she served as a member of the Communications Law Journal, the National Trial Litigation Team, and the Moot Court, while also serving as President of the Alternative Dispute Resolution Committee.

Ms. Blocker's career as an attorney now spans more than 12 years, during which time she has worked extensively in the fields of personal injury law and medical malpractice/HIPAA law. She has also served as a volunteer Public Defender in the Juvenile Justice Circuit Court for the Maryland Office of the Public Defender. When not in the office or in Court, she enjoys tennis, cooking, and her latest home improvement project.

Thank you for contacting us. We will get back to you shortly.

Please complete all required fields below.

We'll gladly discuss your case with you at your convenience. Contact us today to schedule an appointment.